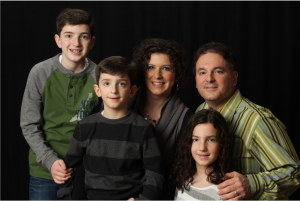 God’s Grace Bible Church in Millbury is pleased to have Bill Siegler from Chosen People Ministries. He will be speaking on “Who Has Believed Our Report? – The Gospel According to Isaiah 53.”

Bill Siegler was raised in a traditional Reform Jewish home in New York City. He attended Hebrew school as a child and was taught the stories of the Bible and about the lives of many heroes of the faith. After Bar Mitzvah at the age of 13 he became increasingly secular and eventually declared himself to be an atheist in his mid-teenage years.

Sometime after his eighteenth birthday, Bill opened the B’rit Hadashah (New Testament) and began to read the Sermon on the Mount. He had no prior exp

osure to Jesus or anything Christian. Jesus’ words about the Law and living out the Law from the heart spoke to him like nothing else ever had. It was from that time forward that he began to read the New Testament and to explore the proposition of Jesus of Nazareth being the Messiah of Israel. About six months later he was alone in his dormitory room reading about the Gospel when he rose from his bed and confessed faith in Jesus. At that moment he felt the presence of God come upon him and he knew that what he had just confessed was indeed the truth.

Bill started to attend a Bible study hosted by Chosen People Ministries and eventually began preparing for the work of the ministry within the context of a local Boston church. He has served in multiple pastoral staff roles and as an itinerant speaker throughout the United States and Canada. He earned the Master of Divinity degree from Gordon Conwell Theological Seminary and currently resides a short distance north of Boston, MA with his wonderful wife Mary Ellen and three children. The Siegler’s are excited about ministering to the Jewish community in the greater Boston area and are currently leading North Shore Messianic Fellowship in Beverly, MA.