Putting the Bible Back Into Church!
admin
Apologetics, Discernment

An Exercise in Missing the Point
by Bob Picard 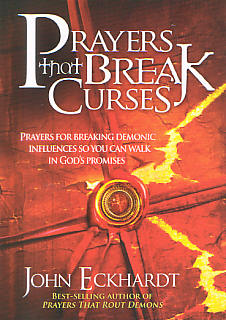 le in Charisma Magazine, entitled, “6 Scripture-Proven Ways You Can Be Healed, by John Eckhardt.”

People are plagued with generational demons of infirmity such as diabetes, high blood pressure, certain heart conditions, and more. If there is a generational curse that is activating sickness in your body, know that because Jesus was made a curse for us, you can tell the devil that he will not put this sickness in your body. Tell him, “I don’t care if my mother, grandmother, or greatgrandmother had this disease; the curse stops here. I break it in the name of Jesus.” Begin to rise up and use your authority! Say, “I am not cursed. I am blessed. My body is blessed with healing, in Jesus’s name.”

The first thing to notice is that there is a Scripture reference leading to Galatians 3:13. Now, it’s commendable that they reference a verse, but does that verse teach anything about healing?

The answer is an overwhelming answer, “No, not at all!”

Galatians 3:13 Christ hath redeemed us from the curse of the law, being made a curse for us: for it is written, Cursed is every one that hangeth on a tree:

Did you notice what curse a Christian is redeemed from (not healed)?  The curse of “the Law!” Yes indeed, the Law is a curse!  Why?  Because there is no person who is able to keep the Law, and if they desire to do so, they must keep the ENTIRE Law!  You may as well start singing, “To Dream the Impossible Dream” with that.

Upon further review we see that the entire passage, in context, has absolutely nothing to do with our “authority.”  It has everything to do with Jesus, and the Gospel of Salvation. He was, and is, the only One who’s able to fulfill the Law, and He died because of our “lawlessness.”

Galatians 3:10-15 For as many as are of the works of the law are under the curse: for it is written, Cursed is every one that continueth not in all things which are written in the book of the law to do them. But that no man is justified by the law in the sight of God, it is evident: for, The just shall live by faith. And the law is not of faith: but, The man that doeth them shall live in them. Christ hath redeemed us from the curse of the law, being made a curse for us: for it is written, Cursed is every one that hangeth on a tree: That the blessing of Abraham might come on the Gentiles through Jesus Christ; that we might receive the promise of the Spirit through faith. Brethren, I speak after the manner of men; Though it be but a man’s covenant, yet if it be confirmed, no man disannulleth, or addeth thereto.

Instead, the Believer in Jesus Christ needs to realize, not how great he is, and how much authority he has, but how weak and beggarly he is.  For then, and there rests the power of God, not just for justification purposes, but for sanctification purposes as well.

The Apostle Paul sought a healing from the Lord, because of the thorn in the flesh that was given to him

for the purpose of humility.  The Lord’s answer to him was not for him to use his authority, and say, “I am not cursed. I am blessed. My body is blessed with healing, in Jesus’s name.”

The Lord’s answer is emphasized in the account from 2 Corinthians 12:

2 Corinthians 12:7-10 And lest I should be exalted above measure through the abundance of the revelations, there was given to me a thorn in the flesh, the messenger of Satan to buffet me, lest I should be exalted above measure. For this thing I besought the Lord thrice, that it might depart from me. And he said unto me, My grace is sufficient for thee: for my strength is made perfect in weakness. Most gladly therefore will I rather glory in my infirmities, that the power of Christ may rest upon me. Therefore I take pleasure in infirmities, in reproaches, in necessities, in persecutions, in distresses for Christ’s sake: for when I am weak, then am I strong.

Humility is the hallmark of the Christian faith, not self seeking.  As Bible believing Christians we should not be seeking instant gratification of the flesh, but seeking “the kingdom of God, and His righteousness.  The “Me Generation” has infiltrated the world of Christianity, and has replaced Biblicism in the majority of “churches” today.

Brother Noel Chartier, from his book, “Mystery of the Mayas and Aztecs Solved” has rightly concluded that the same root of apostasy which caused the collapse of those ancient civilizations many years ago, is indeed the same root which has infiltrated the “church” today:

For those who remain ignorant of history and their Creator, through the influence of evolution, one may think that religion has advanced to a higher plain.  Outwardly it may appear to be more splendid and ornate.  However, as civilization and social conditions advanced, the blending of barbaric absurdities and rites took place.  Formalistic rituals, fashionable vestments and lofty temples had the appearance of a greater and higher plane, but inwardly it was more debased and exceedingly distorted, descending from purer simpler beginnings, resulting in the degradation of the one true faith.

Since New Testament times when Jesus Christ came in to the world to give light and hope to a perishing people, it did not take long before His Light began to diminish and once again mankind began his descent into tht period known as the “Dark Ages.”

The Apostle Paul foretold of this saying, “For I know this, that after my departing shall grievous wolves enter in among you, not sparing the flock. Also of your own selves shall men arise, speaking perverse things, to draw away disciples after them. Therefore watch, and remember, that by the space of three years I ceased not to warn every one night and day with tears” (Acts 20:29-31).

Peter also foretold of this cancer that would spread throughout the church saying, “But there were false prophets also among the people, even as there shall be false teachers among you, who privily shall bring in damnable heresies, even denying the Lord that bought them, and bring upon themselves swift destruction” (2 Peter 2:1).

By the time Jude wrote his epistle, this was already taking place, “Beloved, when I gave all diligence to write unto you of the common salvation, it was needful for me to write unto you, and exhort you that ye should earnestly contend for the faith which was once delivered unto the saints. For there are certain men crept in unawares, who were before of old ordained to this condemnation, ungodly men, turning the grace of our God into lasciviousness, and denying the only Lord God, and our Lord Jesus Christ” (Jude 3-4)

The “faith which was once delivered unto the saints” (Jude 3) began to be corrupted, this time by false teachers and prophets who brought in damnable heresies.  This was the complaint of the Reformers who tried to bring back the pure worship of Jehovah from a caste of pagan priests that were in the guise of Christianity.

Howbeit, the Reformation is now over and we are once again sinking into ever lower depths as Christianity takes up the banner of toleration, syncretism and pluralism, seeking entertainment and pleasure, and the uplifting of self rather than God.  Some would call this revival, as many are now filling their pews to see the latest drama or musical, or to check out the latest trend, but in the last days the Bible tells us a great apostasy would come before Christ returns to set up His kingdom.  (Chartier, “Mystery of the Mayas and Aztecs Solved,”  pp 173-174, emphasis mine)

The answer for the church today is to get back to the basics, to preach repentance and the forgiveness of sins; not just for the unregenerate, but for the Believer as well.  The answer is THE GOSPEL!

1 Corinthians 15:1-4 Moreover, brethren, I declare unto you the gospel which I preached unto you, which also ye have received, and wherein ye stand; By which also ye are saved, if ye keep in memory what I preached unto you, unless ye have believed in vain. For I delivered unto you first of all that which I also received, how that Christ died for our sins according to the scriptures; And that he was buried, and that he rose again the third day according to the scriptures:

1 Corinthians 2:2 For I determined not to know any thing among you, save Jesus Christ, and him crucified.