Putting the Bible Back Into Church!
admin
Illustrations

Many false messiahs, Only ONE TRUE MESSIAH

Without the Cross there would be no empty tomb. And, without the empty tomb, the Cross would have been virtually meaningless.  They are inseparable.  Every other religion has a “type” of Christ.  Something or someone has to be sacrificed in order to work toward “salvation.”

The empty tomb backs up Jesus’ Words, “It is finished.”  It not only backs up the Words, but also adds an exclamation point to them.

Many people have died for their convictions.  Many have even died, even thinking they could save others.  Yet, their works are vain, because their bodies are still where they were laid, or perhaps been reconstituted into dust. 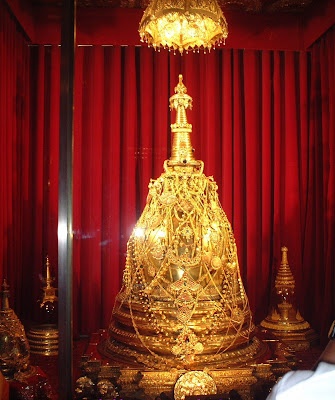 Tomb of the Sacred Tooth

All of the other past religious leaders are dead, and their bones are still in the grave.

Millions flock to Medina each year to visit the grave of Muhammad.  Yet, the amazing thing is this.  He is still there. His body still lies there.  Jesus IS still alive!

The Buddha was cremated, and parts of him are still scattered throughout various places in the world.  As a matter of fact, there is a temple in Sri Lanka that has one of his teeth.  the temple’s name – “The Temple of the Sacred Tooth!”  You cannot make this stuff up.

But, Jesus, because of His Resurrection, is alive, has a complete body, and is currently in heaven “ever making intercession” for us.