Rome has always believed in a failed Jesus

Recently, during Pope Francis’ much ballyhooed visit to the United States, he made the ever so controversial statement that Jesus, and the Cross, was a failure. Here is the quotation:

“The cross shows us a different way of measuring success. Ours is to plant the seeds. God sees to the fruits of our labors. And if at times our efforts and works seem to fail and not produce fruit, we need to remember that we are followers of Jesus Christ and his life, humanly speaking, ended in failure, the failure of the cross.”

Much of Evangelicalism is in a tizzy over the statement. They just cannot believe that the pontiff would say such a thing. Everyone knows that the Cross of Christ is a central tenet of Roman Catholicism.

The Roman church claims to believe in the death, burial and resurrection of Jesus Christ. As evangelicals, we know this is THE Gospel; the complete, finished work of Jesus Christ. Paul’s First Letter to the Corinthians states THE Gospel in its clearest, purest fashion:

Now I make known to you, brethren, the gospel which I preached to you, which also you received, in which also you stand, by which also you are saved, if you hold fast the word which I preached to you, unless you believed in vain. For I delivered to you as of first importance what I also received, that Christ died for our sins according to the Scriptures, and that He was buried, and that He was raised on the third day according to the Scriptures, and that He appeared to Cephas, then to the twelve. After that He appeared to more than five hundred brethren at one time, most of whom remain until now, but some have fallen asleep; then He appeared to James, then to all the apostles; and last of all, as to one untimely born, He appeared to me also. For I am the least of the apostles, and not fit to be called an apostle, because I persecuted the church of God. But by the grace of God I am what I am, and His grace toward me did not prove vain; but I labored even more than all of them, yet not I, but the grace of God with me. Whether then it was I or they, so we preach and so you believed. – 1 Corinthians 15:1-11

Unlike the Biblical Gospel, Rome has promoted, and continues to promote, a dangerous, damning false gospel.

On the Cross, as He was dying, Jesus exclaimed, “It is finished!” (John 19:30). What was finished? The work of salvation! Your salvation was completed because the Savior gave up His life to do so.

I am the good shepherd, and know my sheep, and am known of mine. As the Father knoweth me, even so know I the Father: and I lay down my life for the sheep. And other sheep I have, which are not of this fold: them also I must bring, and they shall hear my voice; and there shall be one fold, and one shepherd. Therefore doth my Father love me, because I lay down my life, that I might take it again. No man taketh it from me, but I lay it down of myself. I have power to lay it down, and I have power to take it again. This commandment have I received of my Father. – John 10:14-18

Catholicism does not believe that. They continue to crucify Christ at every Mass. The priest is over and above Jesus, for he holds the title, “Alter-Christi,” which is Latin for 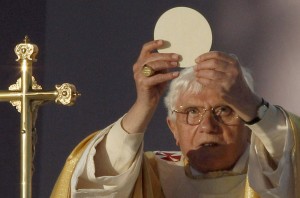 “substitute for Christ, or “against Christ.”  You see Romish doctrine turns a mere mortal into a replacement for Christ. The Roman Catholic priest has the alleged power to crucify Jesus over and over, and over, and over, and… After all, that is what the Mass is all about. The Catholic Catechism has this to say about the crucified One:

By the consecration the transubstantiation of the bread and wine into the Body and Blood of Christ is brought about. Under the consecrated species of bread and wine Christ himself, living and glorious, is present in a true, real, and substantial manner: his Body and his Blood, with his soul and his divinity (cf. Council of Trent: DS 1640; 1651). – Catechism of the Catholic Church, Paragraph 1413

As sacrifice, the Eucharist is also offered in reparation for the sins of the living and the dead and to obtain spiritual or temporal benefits from God. – Catechism of the Catholic Church, Paragraph 1414

You see, at every “celebration” of the eucharist Christ is sacrificed. The Cross was indeed a failure to them.

Here is what the Bible says in the Book of Hebrews regarding the sacrifice of Jesus:

Wherefore he is able also to save them to the uttermost that come unto God by him, seeing he ever liveth to make intercession for them. For such an high priest became us, who is holy, harmless, undefiled, separate from sinners, and made higher than the heavens; Who needeth not daily, as those high priests, to offer up sacrifice, first for his own sins, and then for the people’s: for this he did once, when he offered up himself. – Hebrews 7:25-27

Neither by the blood of goats and calves, but by his own blood he entered in once into the holy place, having obtained eternal redemption for us. For if the blood of bulls and of goats, and the ashes of an heifer sprinkling the unclean, sanctifieth to the purifying of the flesh: How much more shall the blood of Christ, who through the eternal Spirit offered himself without spot to God, purge your conscience from dead works to serve the living God? – Hebrews 9:12-14

For Christ is not entered into the holy places made with hands, which are the figures of the true; but into heaven itself, now to appear in the presence of God for us: Nor yet that he should offer himself often, as the high priest entereth into the holy place every year with blood of others; For then must he often have suffered since the foundation of the world: but now once in the end of the world hath he appeared to put away sin by the sacrifice of himself. And as it is appointed unto men once to die, but after this the judgment: So Christ was once offered to bear the sins of many; and unto them that look for him shall he appear the second time without sin unto salvation. – Hebrews 9:24-28

By the which will we are sanctified through the offering of the body of Jesus Christ once for all. And every priest standeth daily ministering and offering oftentimes the same sacrifices, which can never take away sins: But this man, after he had offered one sacrifice for sins for ever, sat down on the right hand of God; From henceforth expecting till his enemies be made his footstool. For by one offering he hath perfected for ever them that are sanctified. – Hebrews 10:10-14

The bottom line is that the Roman Catholic Church has always believed in a failed Jesus, or an insufficient Jesus. In Catholic theology, the Cross was, and is, merely an entrance into faith. One needs to partake of the eucharistic sacrifice of Jesus; a false Jesus who is called out of Heaven by a false priest that has the power, by a magical incantation, to change “Jesus” into bread, which is then sacrificed to satisfy the Father.

And at midnight Paul and Silas prayed, and sang praises unto God: and the prisoners heard them. And suddenly there was a great earthquake, so that the foundations of the prison were shaken: and immediately all the doors were opened, and every one’s bands were loosed. And the keeper of the prison awaking out of his sleep, and seeing the prison doors open, he drew out his sword, and would have killed himself, supposing that the prisoners had been fled. But Paul cried with a loud voice, saying, Do thyself no harm: for we are all here. Then he called for a light, and sprang in, and came trembling, and fell down before Paul and Silas, And brought them out, and said, Sirs, what must I do to be saved? And they said, Believe on the Lord Jesus Christ, and thou shalt be saved, and thy house. And they spake unto him the word of the Lord, and to all that were in his house. And he took them the same hour of the night, and washed their stripes; and was baptized, he and all his, straightway. And when he had brought them into his house, he set meat before them, and rejoiced, believing in God with all his house. -Acts 16:25-34

The only hope is to trust in the finished work of Jesus Christ. Believe the Good News, that Jesus died on the Cross for your sins, and was raised for your justification. There is no man-made system that can rescue you from sin, including the supposed “sacrifice of the mass.”

Your eternal life depends on it!